I have been asked enough that I have checked for a sign hanging on my back that says “free English tutor”. But there is not such a sign. A very tall Burundian student here at HAU came running towards me the other day shouting, “excuse me, excuse me.” One thing you must know, Burundians don’t shout at each other. If one wants someone’s attention they hiss. (I hate that) Another thing Burundians don’t run, unless they are playing football (soccer). And now that I think of it most Burundians don’t fit into the tall category. I actually don’t fell short here because of that, it’s nice. Mom you will love it. Well side notes aside he began to ask me if I would tutor him in English. I started in with my well rehearsed, I’m not the English teacher my cousin is, routine. He wasn’t having it. He spoke with urgency and a slight studded. He explained that he knew I was very busy and so the tutoring could be only once a week for a half an hour. This sounded nice. All the others that desired tutoring wanted help every night. I told him that there was an English fluency class that was forming with no charge. He said he was very busy. He began listing his commitments to church, bible study, and choir. His life sounded like mine back home. I’m not sure what made me say yes but there I was signing up for weekly quality time with the tall Burundian teaching a language I have troubles all by myself without trying to explain things.
A few days later a girl came up to me in chapel. She began to explain herself in French. I gave her the, “I care about you but have no idea what you are saying” look. She then said, “Swahili?” I shook my head no. She then began in English. She could introduce herself. She is Congolese, an economics major and this is her first year at HAU. Then it was back to French. I could tell by her intro that it was a well rehearsed piece of literature for her. My eyebrows began to furrow and a worried look began growing on my face. She has a cute smile that sits nicely on her sweet face, which is framed by her tightly curled braids. I could tell she was smart and had lots to say. She wanted something specific from me. Deep down I knew it was an English tutor. The language barrier was large enough that she ended up walking away.
You should be careful when you let down your guard and say yes to a tall Burundian, the same question might be asked of you two days later from a sweet faced Congolese girl. She found me after chapel and called over her friend to translate. I had to give it to her, there was no getting around it this girl was persistent. I gave in, Wednesdays at 6.

It was 4:45 and I heard Stephanie say, “they’re coming”. Men began to parade into our apartment. The first had two foam mattresses. The second and third carried the bed frame, the fourth and fifth carried slats that would work as a box springs without the spring. Then the girls came. Emiline, our house girl, had some sheets. Another girl brought a pillow. Two other girls seemed to be there just to watch. When I saw the first man I quickly shut the door to Stephanie’s bedroom, where I was resting in shorts and a tank top. I threw on a skirt and a button up top to cover my shoulders. I hurried into my room to help move things out of the way. By the time I had moved the things and gotten out of the way the parade of men and girls was going the other direction. Here in Burundi they know that many hands make light work. Stephanie and I were again alone. I heard something in my room though. It was Emiline. In the rush of people in and out I didn’t notice that she had stayed back. She was in my room making up my bed with clean white sheets. As she was leaving I remembered the mosquito net which was currently over the middle of the room. My bed was against the side wall. I took her into my room and pointed to the net, then pointed to the bed. She understood and left. 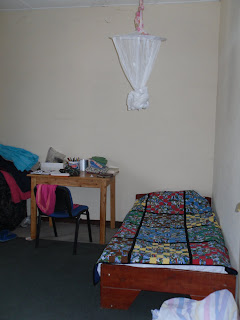 It was 5:45. Stephanie and I were in the kitchen making macaroni and cheese. Priska was at the door followed by John Baptist holding a tall ladder. “Come in, you are welcome” I said. No explanation needed, Stephanie and I went back to cooking. Because of the excitement of the day the time got away from me and so dinner was started later than it should have. It wasn’t finished until 6. I quickly ate it and made my way down to the library to meet my tutoree after some last minute coaching from Steph. I entered the library and looked all over, no sign of her. I looked at my watch 6:10, did I miss her? I stayed for 15min and looked in the novel section. I found a book I liked and checked it out. Adam, the one checking out books and I had a good conversation. He liked my name and I sure liked his. I told him about my brother. I then made my way towards the door and was stopped by, “teacher, teacher.” It was the man at the coat check. Well it’s not a coat check it’s a bag check. Before entering the library students must drop their bags off to stifle the desire to steal books. He wanted to know the question everyone has, “how do you find Burundi?” They want to know if I like the climate and the people. I’m always happy to respond to that question. I love it here! After that conversation I made my way up to my apartment again. 10 minutes after I was at the apartment I heard a knock on the door; it was the sweet faced Congolese girl. I told her I would be right down. There wasn’t a quiet place to talk anywhere, we settled on pulling two chairs out to the hall of the new building under a florescent light.
Now if I thought that the first and second encounter with her in the chapel was hard then this was like pulling out teeth. This is not my gift. I drew pictures and she said words. She would tell me what she wanted in French. There are some words that are the same in French and English. From those words I gathered that what I was teaching was not what she wanted. She said conversation, but when I began conversation it didn’t seem of interest to her. We talked about music, at first she seemed very interested but then I knew she didn’t want to just talk. After much awkwardness she pulled out a text from her English class. She began to read it. I helped her with her pronunciation of words and she seemed to like that. After she was done I still felt that she wanted something different. I settled on the fact that on Friday at chapel we would get someone to translate for us and she could then tell me what she was wanting. I came home feeling discouraged and stressed out.
Going to tutor today was not a high priority for me. I was not looking forward to awkward silence and confused looks, but I told him I would go. We had the same problem of locating a place to meet. We finally gave up on the new building and went to the cafeteria. The chapel team was practicing and so it was hard to hear him. He talked for 40 minutes in perfect English all about his passion for Christ and the lost. He told me about how he enjoys visiting those who are ill in hospitals, his cousin living in England who has no hope, and a history of Burundi and the wars. It was great to hear someone share all about his faith. It was great to listen to his heart for the lost. It was great to listen to the history of Burundi from the perspective of the inside.
When he was through I asked him if he just wanted to sit and have conversation. He told me that it was up to me. He wanted to show me his skill level. I don’t think he believed me when I told him he only made 5 grammatical errors in the whole 40 minutes. It was awkward sitting in the room just the two of us so when he asked if his friend could join next week I said, “Absolutely!” It will be nice to have a third person in the room. He wants to enhance his vocabulary; I can help with that!
Two tutoring sessions, one leaves me anxious and stressed the other blessed and uplifted. As different as night and day.
Posted by Isaac & Rachel Mubezi at 6:28 AM