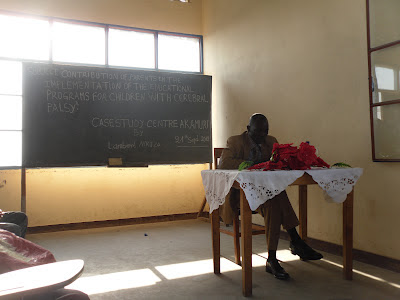 So much talk of the little ones…where have all the university students gone.
Well…I was privileged to attend the Thesis defense of one of my university students. In Burundi students are required to write a thesis (book) to go along with their internship and then present it in front of a panel of three very scary looking professors. Last Friday it was Lambert’s turn.
Past with an 86%, couldn’t help but think, that’s my student once it was finished.
Posted by Isaac & Rachel Mubezi at 9:31 PM No comments:

Can you spot what my students spotted during our math lesson? 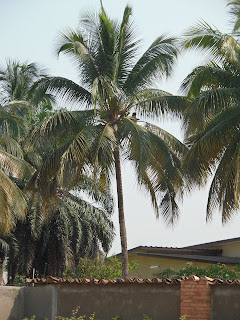 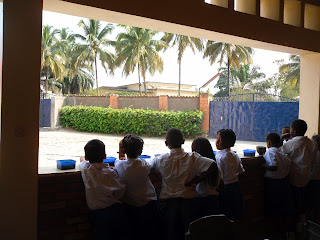 I guess my lesson plan won't do...not as exciting. 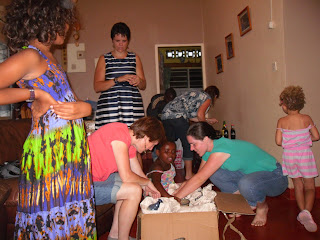 My house-mate's birthday proved to be profitable for me as well. We scored kitchen wear for her present!!! The box was full of hand turned clay kitchen ware. :)
Posted by Isaac & Rachel Mubezi at 10:26 AM No comments: 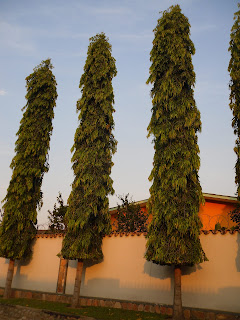 I'm convinced that Dr Seuss visit Burundi before he began to draw pictures for his books.
Posted by Isaac & Rachel Mubezi at 10:19 AM No comments:

The theme is plants. Today we are sorting seeds in Math and then in science we will plant them :) hopefully I'll remember to take pictures
Posted by Isaac & Rachel Mubezi at 8:39 PM No comments:

I have learned so much in the last week. Most importantly, Story time is a must!!! I spend more time reading stories to them and teaching through them than I do teaching at the whiteboard. They come in from playing under the hot sun and they are so hot and tired that all we can do is sit and read a story together.
The best lesson this week was off the cuff. I asked a student to grab a book off the shelf, “Good Morning Sun.” I had them sit at their tables. I explained that they could put their heads down if they wanted to and just listen. By the end of the story we had learned all about the sun rising, setting, shadows, and more. I was amazed that even though the sun shines every day they don’t know that much about it. Story time turned into journal writing time. The prompt, “The sun…” There were so many different pictures drawn and things dictated to me to write about.
What a great lesson. I, we, needed a good time of quiet learning and work. 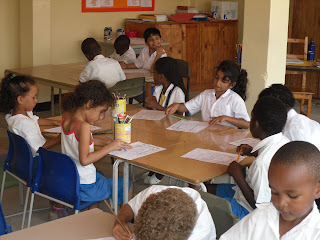 Looking forward to next week.
Posted by Isaac & Rachel Mubezi at 12:47 AM No comments:

First Week of School Coming to a Close

So the first week of school is done, I know who the wiggle worms, the quiet ones in the corner, the confused, and the talkers. I have placed them in reading groups, including a group of four who are just working on learning english. I also have decided that my classroom, as beautiful as it was before school started, needs some serious reorganization.
With a few more assessments I feel that I will know my students well enough to start teaching them at their level, not too high and not too low.
I'm excited to actually start teaching them and learning more about how they learn best. There is so much to do, letter sounds, number value, following directions, writing letters, problem solving, reading, and getting along with your neighbor. I've already started saving papers to look back over at the end of the year. It will be great to see the progress. I think we will all have a good laugh at the "good work" we have done these last few days compared to what work will look like in 10 months.
Please pray for my students as we take this journey down the path to the second grade.
Posted by Isaac & Rachel Mubezi at 7:38 AM 1 comment:

Day 4 of Teaching...when is nap time

It is Day 4 of teaching and I need a nap! I'm so tired. Three of my students have limited english and one has none at all. Try reasoning with him to do the right thing...my goodness!
Power was on last night but water turned off at 5pm. We prayed that it would turn on for a morning shower. Praise the Lord it was on. But it was a very cold morning. Wore a sweater over my t-shirt.
The children are getting the hang of stations or centers. One group is doing an art project while another is playing with something to work on fine motor control, another group is playing a spacial awareness game and I'm working with another for vocabulary and following directions. Then after 20 minutes we switch.
I was so proud of them today because I only had to tell them to control their noise and standing. Yesterday they were out of hand. So proud of my little guys for following directions today!!!

Perhaps I'll reward myself by making pizza for dinner! :)
Posted by Isaac & Rachel Mubezi at 4:44 AM No comments:

I have 17 students in my class, they were so quiet today. I'm used to teaching severe special needs and university students. Year 1 is completely different! They looked at me in anticipation, waiting for me to say something, do something. Eager would be the word I would choose for them. They are like sponges, eagerly awaiting something to fill their minds with. I'm so privileged to be trusted with this task. Whatever I give them this year will be carried throughout their lives. Lord give me strength for this enormous task.

First day of school jitters this morning.
I have 18 little 5 and 6 year olds currently waiting outside the gate for their first day of Year 1.
Today we will be playing with cars, doing puzzles, memorizing poems, coloring and of course having lots of fun.
I'm excited yet nervous. Please send up a prayer for me.
Got to go, staff meeting starts in 3 minutes!

Posted by Isaac & Rachel Mubezi at 9:57 PM No comments:

What a great time I had in the State visiting friends and family. But it is also great to be back in Burundi!!!

Flew into the DC airport with no trouble. Spent 24 hours with Sister Sarah and her Husband. It was great spending time with her. On the way out of DC the computer system was down and all flights were delayed, I stood in line for 3 hours with really nice people. Took the flight and rushed for the transfer in Brussels Belgium. Made it with time for a 10 min cat nap. The plane was all ready to go and the car to push the plane back from the terminal was broken, waited for a new machine and then we were off.
While on the plane I met a lady from Portland, Oregon area. Her name is Kate. She will be in Burundi for 18 months. Today I got to show her around the city. Please pray that the door will be open to sharing the gospel. She is very open about her lack of belief and "respecting" people with no belief (sounds very NorthWest of her).
Arriving in Burundi late plus making sure Kate was settled with her bags made our departure from the airport an hour or so later than planned. Isaac was there to greet me and my boss from The King's School were there to drive me home.
I was informed not to unpack because I was maybe moving the next day.
The night was full of "welcome back" realities.
No mosquito net meant I was chasing mosquitoes every 5 minutes. I would have been fine if I had only remained beneath my sheet and quit (thanks mom) but the heat was just too much after about 3 minutes. So I would uncover to let my body cool back down to a reasonable temperature. Then cover again when the dreadful whine of the mosquitoes came back out. After about 2 hours and 20 mosquito bites later I gave up and fell into a shallow sleep. Finally at around 5am I fell into a deep exhausted sleep.
It was a great drum beat when I think back to on it but at the time waking up to Burundian Drummers right outside my window was just too much of an alarm clock for me. The primary school has a troupe of Burundi traditional drummers (think of a little league team but with drums instead of bat and ball). Practice was at 10-11am. I knew sleep was over for me but continued in a sleepy closed eyes state trying to avoid the day. Then the phone rang. My boss informing I was moving and needed to be ready by 2.
I was ready by 2 but the transportation didn't come until 7pm! That evening I was just so excited to move into the new house with my new roommate that I had to unpack, even though it was pushing 10pm.
Liz is great! She is new to Burundi and will also be teaching at the primary school. I'm looking forward to learning more than just a British accent from her, being that she has been teaching for a while.
Today, as I said earlier, was a day to wonder the city with these two new residents of Burundi. I did my best not to overwhelm them with the sights, sounds, and smells of this crazy city I call home.
Church tomorrow and then staff meetings start Monday morning early.
Thanks for your prayers. Please lift up this next week as I set up my classroom, sit in staff meetings learning protocol for teaching in the British system, and as I lesson plan for the FIRST WEEK OF SCHOOL! I'm just a little excited :)
Posted by Isaac & Rachel Mubezi at 8:51 AM 1 comment: