Now I'm out of Africa, Egypt included. I'm currently at a hotel in Rome waiting for the travel agent to get back to me about a flight home. Currently I have none.
Please pray that I would get a flight so that I can relax and know that I will get home sometime.
I just want to go home!
Posted by Isaac & Rachel Mubezi at 10:47 AM No comments: 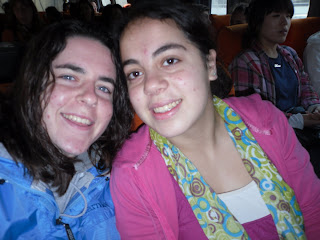 Went on a church retreat last weekend. It was nice to be able to wonder around the rounds alone and spend some quality time chatting with my Father. :) 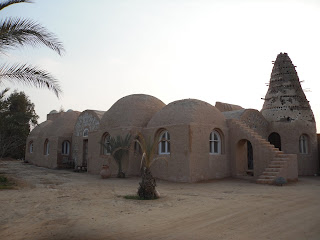 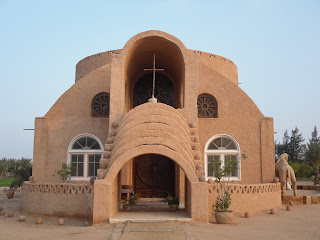 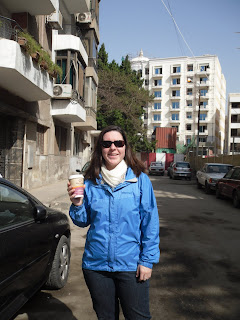 I went on a walk today and nothing looked any different than normal. I was joking that it's probably safer now wondering around because all the crazy trouble makers are in one area that is easy to avoid.
Posted by Isaac & Rachel Mubezi at 4:07 AM No comments:

In case you are hearing about Egypt in the news lately I just want to let you know that I'm safe. The neighborhood in which I'm staying is not near the political demonstrations that are occurring in the downtown area. The issue is between the locals and has nothing to do with foreigners.
Currently I'm staying inside and reading a book.
Thank you for your prayers
Posted by Isaac & Rachel Mubezi at 4:43 AM No comments:

I was just reviewing my blog and realized I didn't post any pictures from Graduation or of my students. So here they are. 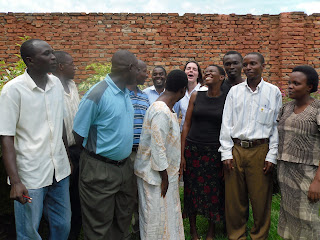 Special Education class of 2011. I taught them all year long! We had a fun time and learn lots from each other. 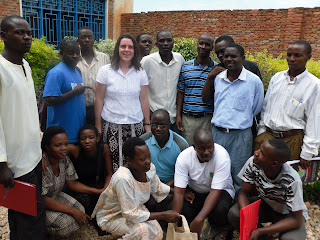 Entire Special Education department at HAU. Happened to all take my first course in Sign Language.

Graduation with friends and students. 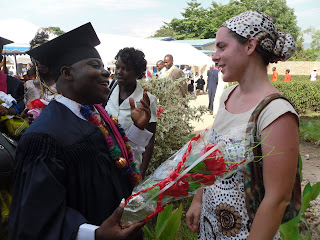 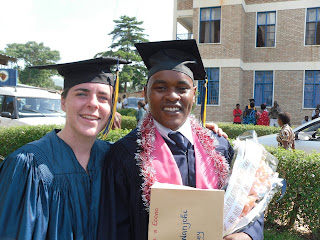 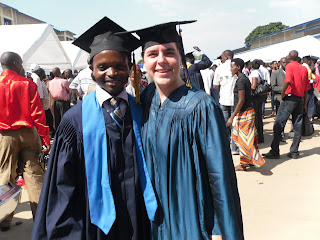 Posted by Isaac & Rachel Mubezi at 7:05 AM No comments:

So today I was not only a special education teacher but I was a speech therapist, physical therapist, occupational therapist, librarian, and kindergarten teacher. It was great! I love being able to work with children and do something I love.
Good day!!!
Posted by Isaac & Rachel Mubezi at 6:50 AM No comments: 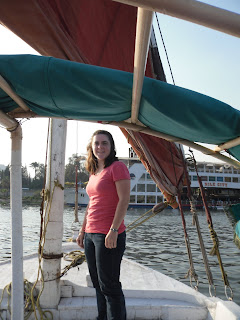 Went on a faluca (a fat sailboat) ride today on the Nile with a new friend then wondered around the city. 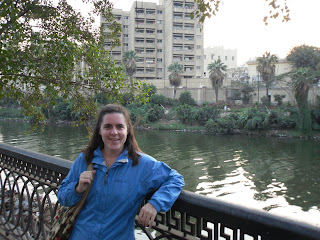 Nile in the background
Posted by Isaac & Rachel Mubezi at 9:27 AM No comments:

So Dad asked me if my blog was dead...well it's not. 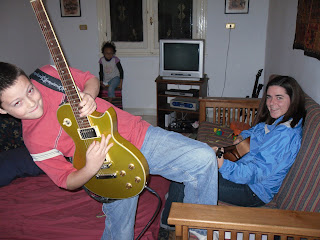 My responsibility here is working at an elementary school for international students. I'm helping out the principle and supporting teachers there who have disabilities.
It's fun to work again in a classroom and with children.
Posted by Isaac & Rachel Mubezi at 9:01 AM 1 comment:

I'm back!!! It's good to be back in Burundi where I know where things are and how to do things. I've spent the last two days rushing around the city getting things done. Wow it's good to be back. I fly out on Monday for Egypt.
I journaled my whole Congo trip and will post date it with the exact date on the blog. I hope to do that within the week so please check back for the updates for Christmas and New Years.
Thanks for all your love and support guys!
Please pray for me as I say good by to my home I love so much and my dear, dear friends.
Posted by Isaac & Rachel Mubezi at 9:18 AM No comments:

It’s amazing how illness slows productivity. Alice and I have different things but bed was where you could find us most of the day. Randy went to a funeral of a friend. I finished my book. The second one I’ve read since I came here. I started another one and now I’m half way done with the third. And for those who know me know that that is huge. It’s amazing how enjoyable reading is here and how much time I spend doing it. But when the power is off and the sun disappears at 6 what else can you do? Randy informed me at dinner that my Congolese lover came to call on me. Sunday morning “the man”, as I have nicknamed him, came walking up the drive. ( I informed Randy the first day we arrived that he was going to be trouble for me.) I was washing dishes with Randy and I informed him who would be at the door. He went. I overheard the conversation, “Is Rachel there?” Randy came in and I told him that I would only go if he would be my body guard. Randy chuckled and agreed. “The man” had a book for me. He had drawn household items and written the Swahili word next to it. After explaining the book he explained the importance of knowing Swahili while working and living in Africa. The awkwardness was over and he left. I was grateful that the Congolese don’t hold the Burundian custom of shaking hands before and after conversation. He left without caressing my hand, I was grateful.
In the evening I worked some more on the master plan/map for the proposed special education school. It’s looking good. Sleep. Hopefully tomorrow I will get some meds for this pain.
Posted by Isaac & Rachel Mubezi at 10:24 AM No comments:

What a lovely day. I woke up with no pain. Washed dishes after breakfast with Randy while we waited for Alice to finish getting ready for church. We went to a brand new church, Jerome’s. The floor was still dirt and no windows or doors but very well constructed. The breeze blew thru so nicely. 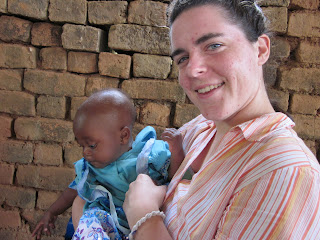 I stole a baby right off the bat. After about a half an hour she started grabbing me and I could tell what she wanted. I diverted her attention for a good 5-10 min but the inevitable happened; she began to fuss. I knew she wouldn’t be calmed so I returned the stolen girl to her mother. 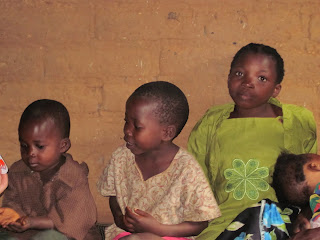 It wasn’t 10 min later that I had group of 6 little ones on my right. My chair was placed a foot and a half from the wall. The children made a nice line along the wall. It was so cute. During the talking I shushed them, but during the singing I encouraged them. One song was in Kirundi. I didn’t know it but I recognized some words and picked it up quickly. It was on of those songs, I had to dance. I couldn’t be confined to my row; but I didn’t want to join the dance in the front of the church and leave the children. So I went to the back. I called them over and we had a great dance session, well I danced and they just jumped. They are still too young to know the art of the Congolese dancing. Although one boy had a wicked air guitar on a later song.
Just before the sermon started the mean usher with the stick came by and told the children to get  With no translation of the sermon what was I to do with no children to keep me company. I was also concerted because if the children are forced to leave they wont’ pick up on Biblical truths from listening, even if they are little. At the end of the service another song started. I turned around and saw some of my “friends” I motioned for them to stand. They did. Then at the closing prayer I turned, folded my hands and squeezed my eyes shut. I opened them a crack to peek at my friends. Every eye was closed and hands were clasped 
After church and after lunch my stomach started to hurt. We went to the beach anyways. Lying on the bed or on the beach didn’t matter to me. I didn’t take into account the 20min drive over very bumpy roads. I was in pain and wanted to vomit! By the time my stomach settled down we were back in the car on our way over the same bumpy terrain. I washed off the lake water and crawled into bed.
My hosts were concerned that I had eaten so little today, but I couldn’t eat even if it was my favorite food.
Posted by Isaac & Rachel Mubezi at 10:08 AM No comments:

Cried today. I got a call from a friend. So nice. Pain in my stomach, fever, lack of sleep, wanting familiar place, missing friends and family. The phone call came at the right time. So good.
I was feeling terrible today yet went to the airstrip to see the damage the river did 15 years ago. Sandals was not the way to go, but all I had. My feet were bit and scratched. My head and body were hot and sweaty. I kept thinking, “I should be in bed.” When we got back that, after my shower, was exactly where I went.
Lunch was a New Years/Randy’s Birthday celebration with the workers. It was too tired. I went over towards the end. Goat and Capitan were served but rice and beans was all that was left when I arrived.
I stayed for a short time, then back to bed with me. Read many chapters of the book. Now in bed again ready for a good night sleep.
Posted by Isaac & Rachel Mubezi at 10:07 AM No comments: