I think she forgot her name, maybe it is written on her palm. 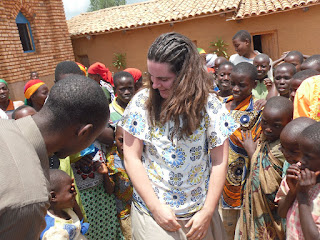 Never a dull time with friends. 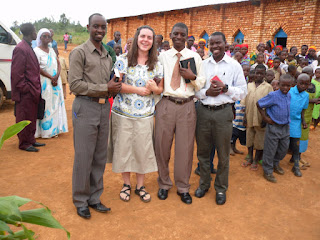 Posted by Isaac & Rachel Mubezi at 8:39 AM No comments:

Shall we sing a song?

What is a girl to do when a hundred curious faces are staring up at her? Sing a song of course. What about Nziza...it's one of my favorite call and response songs :)
Posted by Isaac & Rachel Mubezi at 8:00 AM No comments:

The Boy with the Smile 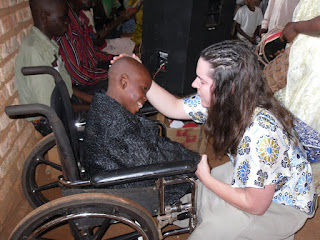 Traveling up country is always an exciting time, bad roads, long church services, confusion from translators using broken english, the much dreaded trip to the "toilet" and many smiling faces.
While sitting in church on one of these up country trips I couldn't help but notice a boy in a suit and tie. He was sitting in a wheel chair. A western style wheelchair? I was shocked. The first thing that came to mind was "how does that wheelchair make it on the dirt roads?" then next was "I wonder what that boy's name was.
The boy had Cerebral Palsy and the biggest smile on his face. He used all the strength he could to keep his head upright during the long church service.
I wanted to go to him. Pray for him. Take him by the hands and help him walk. I quietly sat in my chair waiting for the right moment. The service couldn't end soon enough. I just wanted to spend time with him.
The final prayer was said and I rushed to his side. I greeted him in my best Kirundi. Through his slurred speech it was hard to figure out his Kirundi. With the help of a translator we began to talk. And then we prayed. Something within me burned to see him walk.
I grabbed him by the hands and helped him to his feet. The crowd behind me had grown (as often happens in Burundi) so that I couldn't walk with him very far. They were all waiting for something magical to happen. I knew they had missed it. Something magical had happened; someone had noticed this boy. Someone had taken time to greet him and ask him how he was. They took time to touch him. The crowd didn't realize how isolated this boy must feel and a little attention was something special.
After I put the boy back in his seat I asked for his mother. She was in the crowd watching too. I spent time encouraging her. And then my time was up. I had to move to the next activity.
I will never forget this boy. My prayers are that he will be a strong tower and teach his family and community more about what it is to love your neighbor.
Posted by Isaac & Rachel Mubezi at 7:04 AM No comments: