Please forgive me for my absence. I have been very busy. The semester is now over but it closing included: other American professors/friends leaving, grading papers and projects, writing final exams, visiting with Handicapped International, visiting a center for people with disabilities, a meeting with the rector of the university, administering exams, grading exams, figuring out final grades, and then life on top of that. It was a lot of things packed into two weeks.
Now that classes are done for 10 days I'm taking a break. I'm headed up country to Kibuye for the break. Hopefully I will have plenty of time to blog about what has gone on to let you know. I will also spend the time writing 2 syllabuses for the classes I'm teaching this summer semesters. And time enjoying the cool air and wearing pants :)

This blog entry is brought to you by Barb Volland, and viewers like you.
Posted by Isaac & Rachel Mubezi at 12:07 PM 3 comments:

Oh Saturday you are so slow and needy. Waking up at 6am on Saturday makes the day seem like it lasts forever. At about 10am laying around had lost its enjoyment. It was time for an adventure. What to do. Buja is only so big and has only so many things to do. Go to the beach and work on a tan was the consensus. But which book to take. It's bad when you are dragging your feet about going to the beach because you are afraid you will be board with the book you bring. The book I selected didn't fit in my small purse. I told Stephanie that I needed a bigger bag for times like this. She said, "want to shop for it today?" Now with a new game plan we were on our way. Our second bus I thought for sure was going to fall apart. It was whining the entire time. I could hear the metal grinding and complaining under and behind me each bump we went over.
We looked at the shop but didn't find what I was looking for. The woman, an Oregonian, told us about an ice cream place with soft serve. One of the HAU professors was there and offered us a ride. We got there and...they were out. We hoped on a bus back to town, we had another place in mind. We walked up to the counter and looked into the freezer at the pre packaged cones, bars, and cups of ice cream. I guess it would have to do. Just then Stephanie said, "they have scoop". What, scooped ice cream!!!
It was so good.
Creamy, like it was actually made with milk (we have questions about other ice cream cones we've had here). It was cold and the flavor was good too.
All the way home I could taste the greatness in my mouth.
The best part was it was only a little over a dollar for two scoops on a cone!
Dad that's the first place we are going when you arrive.
We got back to campus at 2pm but I felt that the day was complete. Relaxing all evening sounds good.
Saturday how I love you!
Posted by Isaac & Rachel Mubezi at 6:51 AM 3 comments:

I arrived 5 minutes late hoping not to have to wait in the hot sun too long. I walked onto the vacant playground and went to his door. No answer. I wondered to the classroom whose door was ajar. I saw long tables only about a foot and a half tall and little chairs to match. There were many chairs. I began to count. Seven chairs across and six tables deep on one side of the room. The other side, divided by an isle way looked the same. That puts about 60 students in each class. I turned and looked at the board. There was a grid with the alphabet, one letter per square. There were some things written in Kirundi on the board but I couldn't make them out. I exited the classroom returning to the eerie playground. I looked at the swing set. The seats were slightly swaying from the breeze. I peered into the next classroom. It was the same.
I walked around the building looking for someone to help. He arrived on a bicycle taxi. He apologized greatly for being late. I reassured him that it was ok. We entered his office and began to small talk. Finally I transitioned to my questions. I wanted to know all about the preschool he runs. In the back of my mind I have an angle, I want to know how his preschool might be used to help facilitate special education in Burundi.
The school only runs half day, hence the ominous lack of children. There are only three classrooms, 3s, 4s, and 5s. There are three teachers who were trained in high school for elementary school teaching and one aid who helps monitor the bathroom and crying children. Each teacher is responsible for 60 students in their class. There is no government required or suggested curriculum so they are using what they have used for years. He said that they uses games and songs to learn. He doesn't think the children know they are learning. This is good.
Once my questions were exhausted he began to ask me questions. It was great, conversation that was deeper than small talk. Time was marching on and I had someplace to be. He offered to escort me back to campus but Stephanie showed up and he was content allowing me to walk with her.
I'm excited at the potential that this preschool has to offer. I will go and do a formal observation of the classes and teaching styles on Tuesday. Then the next week I will take my students with me to observe. What better textbook than the real thing.
Posted by Isaac & Rachel Mubezi at 6:21 AM 2 comments:

Thank you so much for your support these last 3 months.
Here is a specific way you can support me in prayer.

Teaching:
The quarter is winding down and so my work load is winding up. I need to write a final exam for 2 classes and the students will be turning in their 5-10 page philosophy papers in one class and the other a huge project. I will be very busy with grading. ~ Please pray for balance and timing for my students and also for me.
Summer classes start soon, first week in June. I am scheduled to teach 2 courses. The first, overview of special education, I'm really excited about. The other, services for teens and adults with disabilities, I'm not excited about because there aren't many services here so I'm not really sure what to teach. ~ Please pray for wisdom and networking with organizations here in Burundi that are already serving this population.
Special Ed Program Research:
I talked to the director of the preschool at the church. I'm very excited about the possibilities of using that as a training site for HAU students. They currently don't have students with special needs identified but there is a possibility that some might be hiding amongst the classes. ~ Please pray for wisdom and cultural sensitivity on how to integrate myself into their program, if that is what God wants.
I contacted 2 organizations that are working with those with disabilities here in Burundi. I haven't heard back from them. I think, like my dad always said, the squeaky wheel gets the grease. ~ Please pray that I would get a meeting with them and that I would have discernment on which organizations to partner with and which to leave.
Personal:
Come summer 4 of those who work with me are leaving, either for the summer or for good. ~ Please pray that I wouldn't be lonely. I don't think I will with all the classes and short term groups coming but it is something that I am taking into consideration.
Posted by Isaac & Rachel Mubezi at 10:31 PM 2 comments:

Day at the Beach with 300+ Students

This event has been the talk of the campus for the last 3 weeks. A group of students, Bible Group, have been planing this event for a long time. We were very excited to participate in the event.
We gathered on campus and walked to the bus stop. We waited until there were at least 30 students. I knew we couldn't all get on the same bus. But I was wrong. What happened was that they stopped an empty bus on it's way to the start of the line. It did a u-turn and we all boarded the bus. It was great sitting on a bus with a bunch of people I knew. I felt safe. I wipped out my camera. I would never get my camera out on the bus normally for fear of looking like a tourist, offending someone, or get it stolen. 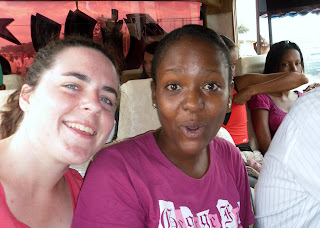 The bus took us directly to the meeting place in town. There we waited for more students to show up. I got to play some volley ball while we waited. Then it began to rain. We went inside, sang some songs, prayed, and got some directions for the day. 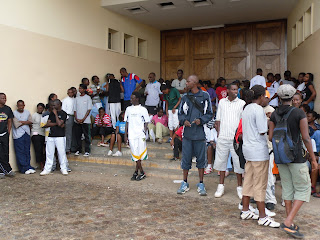 Then we were off.
We were told that we were going to walk to the beach. About a 15-20min walk west of the market. We headed south. Then we began to run. I was so confused. After about an hour we turned and headed west, this was a good sign. After a few blocks we then began to head north. Now I'm confused. We finally arrived at our destination 2 hours after our departure. The students told me it was for fun that we took the long way...I'm not so sure.
I did get to chat with different people along the way, that was great!
Sporting events started, these people still had energy? Volley ball, soccer, hand ball, and some game where they run in circles and try to hit each other with sticks. 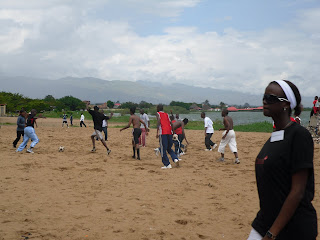 We were then divided into groups and sat down to chat about specific topics. Brandon and I were in the same group. Being the token white people conversation diverted to questioning us. Pop and donuts were delivered to each circle. 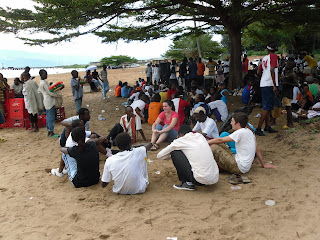 Then we gathered for some time of singing. It was great a big circle of dancing and singing. Love it. 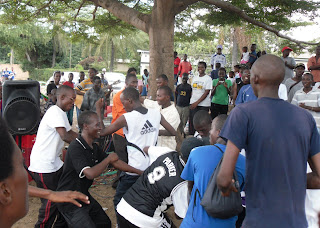 They brought in a speaker who shared in Kirundi and it was translated into French. A student came and sat behind Stephanie and I to translate into English. I am constantly impressed by their language skills.
The day was coming to a close but they said they had another surprise for us. We sat and waited. They brought out Samosas!!! They were so good! Think of a triangle of phyllo dough stuffed with ground beef, grilled onions and great spices.
We gathered for a group pic and then made our way down the dark streets. I stayed close to my friend Achmel the whole walk back to town. 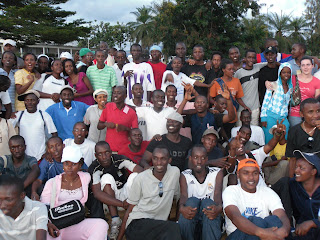 Remember that the sun goes down quickly here, these two pics were taken within 10 min of each other. 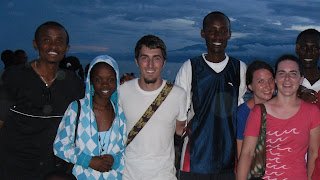 It was a great day. We got home tired and woke up on Sunday very sore. But it was well worth it.
Posted by Isaac & Rachel Mubezi at 12:07 AM No comments: