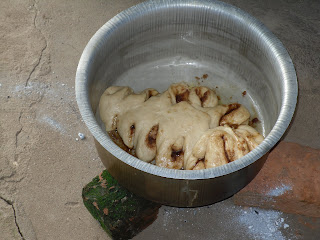 Christmas morning started as it always does, Mom gets up and makes a sugar plum tree. I lay in bed for 30min deciding whether I was willing to put for the effort to be “mom” today. I’m happy with my decision. Alice and Randy were too. I quietly snuck down the hall and unlocked the door; quickly returning it to its place to block out the noise I would make in the kitchen. I had to search all over for the ingredients, being that we haven’t fully unpacked or put things away yet.
Finally the dough was ready. I put it on the stove outside where some coals from last night still gave off warmth. I had just cleaned up when Alice came in and said, “I’ve caught you. What are you up to?” “Nothin’” was my innocent reply. She looked around and saw nothing but wasn’t convinced. I then reminded her that it was Christmas.
When the dough was ready I made a huge sugar plum tree. The extras were made into doughnuts but because of the lack of oil they were baked. I figured chocolate frosting was a must on doughnuts. Forging ahead with no guide I added too much water to the pan and was forced to baby sit it at the stove. Jerome, the cook, showed me how to cook the sugar plum tree “Dutch oven” African style. It was so easy! 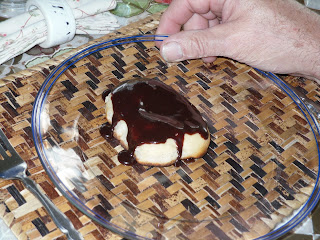 Read the Christmas story and opened presents, a kitchen towel and ruler, protractor, campus set. Oh and chocolate! Alice and Randy are good to me. Church and feast down, now it was time to focus on the real issue, we were running out of water!
With the lack of rain our water barrel was depleting quickly. Earlier in the day there was hope rain but now with the lack of clouds the hope had died. Now there was a problem. The night zamu (watchman) suggested he take some debbys (jerry can/water jugs) to the pump, a 20-30min walk down the road. Randy offered to drive; Alice and I joined the fun. I’d never been to a pump before. Bishop Bucconyori would be proud, I’m “facing African realities” (the university’s motto). After cleaning the debbys out I was on pump duty. I filled two and Randy offered to pump. I told him I was ok. He didn’t offer again though after the fourth debby I wish he would have. The pump was smooth, up down, up down. But the small debbys took 62 pumps and the large ones 78. The next day my hands hurt. I had earned the water for my, now, much needed shower.
The phone didn’t work to call home that evening. I tried to convince myself that it was ok, but the tears still streamed down my face reminding me of the sad truth; I missed my family. 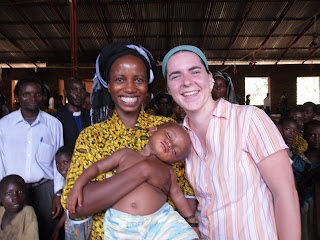