This weekend I took a surprise trip up to Kibuye. The trip was such a surprise that I didn’t even know I was going until 30min before. I phoned Carol Ogden about a visit in the future and she said that her program was full of visitors until they leave except this weekend. Within 30min I had showered, packed, and was on a bus for the weekend trip. I have taken the trip to Kibuye a number of times but never without transportation arranged. Nevertheless I was up for the challenge. I knew there were taxis and buses by Hope Africa University that would take me to Gitega so I boarded a bus to get me to the “bus station”. From there I checked the price. Save $2 and ride in a cramped, sweaty bus making stops all along the way or pay the two dollars and ride in a cramped taxi and get there faster. I took the taxi. I also got a window seat! I was in control of the temperature.
Once in Gitega I found someone to show me to the next taxi to Kibuye. I was dropped off on the road. It was good I only had one shoulder bag and the drawstring bag Stephanie Harris made for me because I had to walk to the Ogden’s house. It didn’t seem long because the village women quickly joined me and we had lots to talk about in my limited Kirundi. Let’s just say there was lots of laughter. Ezekiel, the Ogden’s cook, greeted me half way. It was so nice to see his smiling face. The women I was walking with were surprised that I knew someone from their village.
The weekend was so refreshing. Carol is a great host and Frank invited me to join him in the OR for a C-section, which I gladly accepted.
The medical students from Hope are up at Kibuye Hospital doing their clinical. This was not the reason I went to Kibuye but visiting friends is always a benefit. Because the trip was a surprise for me I decided to make it a surprise for them as well. You should have seen Isaac’s face when I walked into the hospital! The hospital accountant, Hellen, was so excited by the surprise she almost gave it away.
It was nice to visit the hospital and see all the patients that Isaac has been having me pray for. I saw the premature baby that is being kept in a cardboard box with gloves filled with hot water to keep it warm because the incubators aren’t working. 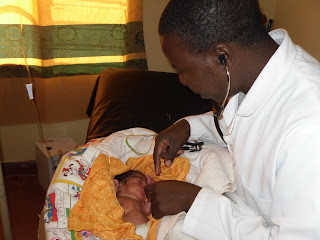 I also saw the 7 year old boy who had to have part of his brain removed after a bad crash. So encouraging to see that my prayers have been answered and not only is he alive but he is looking around as I stood there watching his mother clean him up; there are no children sized catheters so they must change his sheets every time he wets the bed. Still an encouraging sight amongst so much lack.
It is so nice being about to walk around the grounds of the mission station and town and see people I know, friends. I am truly blessed!
Posted by Isaac & Rachel Mubezi at 5:38 AM