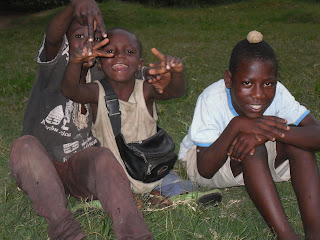 Often I will go to the park with the children here at the house. Most of the time the children play on the swings, slide or ride bikes. This time it was different. A girl from my class was also visiting the park with her family. She brought a ball to play with. She was playing toss with her mother when we arrived. Quickly a game of football ensued. Not before long three Burundian boys joined. They were about 10 years old. Two started playing with no problem. The third was short, very short. It didn’t take long to realize that he was “walking” on his knees. He had his knees wedged into sandals so that they didn’t get scraped up as he marched along. The rest of his legs and feet were shriveled up and nicely tucked under into a permanent “crisscross applesauce” of sorts. He moved with little trouble, except the fact that it took him longer to travel the same distance given his shortened stride. He looked at me hopeful; he wanted to play. I quickly kicked the ball to him. He pounced on it. He began dribbling it across the grass. No one dared take the ball from the boy with the funny legs. Well I had no problem with that. If he wanted to play then he was going to play. I quickly charged at the ball a squeal of joy burst from the boy. He was so excited to play like everyone else. We played for a good 45min. We were all having a good time. I’m not sure of the last time that boy laughed so hard or me for that matter. Every once and a while he would fall over in laughter. The only hesitation I had playing with him was the fact that the hem of my skirt came up to his shoulders. If I charged too fast he would have gone right under it. (I was careful to avoid that, not wanting to make a scene)
Today (3 weeks later) I saw two of the boys on the street begging for money. At once they recognized me and said, “Madam Football”. I was so excited to see them, yet sad all at the same time. They are smart boys and it makes me sad that they are using their time to beg instead of go to school. It is times like these that the mix of emotions is hard because I’m not sure what I can do for them. Perhaps in the future I will be able to take someone to translate for me and inquire more about their lives.
Please join me in prayer for these boys.
Posted by Isaac & Rachel Mubezi at 5:21 AM